Celebrating the 150th Anniversary of the Burgersdorp Gereformeerde Kerk.

In commemoration of the Burgersdorp Gereformeerde Kerk’s 150th Anniversary, I have undertaken this architectural study.

It was a challenge and a unique opportunity to study in detail, and marvel at, the exquisite craftsmanship evident throughout this extraordinary old church. There was so much time, patience and attention to detail during those early days. Everything,  from the wooden pulpit &  pews to the plaster detail on the domed ceiling;  from the stained glass windows to the grand old organ, were carefully and intricately crafted. Everywhere, there are signs of the skills that went into each part of this beautiful building; even in the belfry where a set of bells rings out the tune to Psalm 116 on the hour, every hour, and the main bell is decorated with intricate patterns of vines and roses, hidden away where no-one ever sees, – ah, but God sees!  It is a tragedy that  skills of this standard have died out so long ago!  All we are left with in this disposable age, is architecture, masonry and carpentry that is austere and functional. Building  today strives for the  minimalist-modern style that is invariably, basic and  impermanent.

So, it was an honour to be asked to take time to interpret this outstanding old building. What is more significant for me is that this remarkable church is built to glorify Almighty God. May He be praised for the blessings and mercy He has bestowed on this worshipping community that will gather at the Festival on the 13th March 2010 to celebrate 150 years.

This collection of paintings, along with prints and cards will be displayed at the Festival.

This monument, on the farm Roosterhoek, between Burgersdorp and Venterstad, marks the place where the Church first began in 1860. 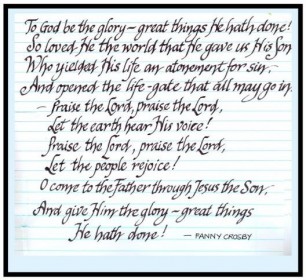